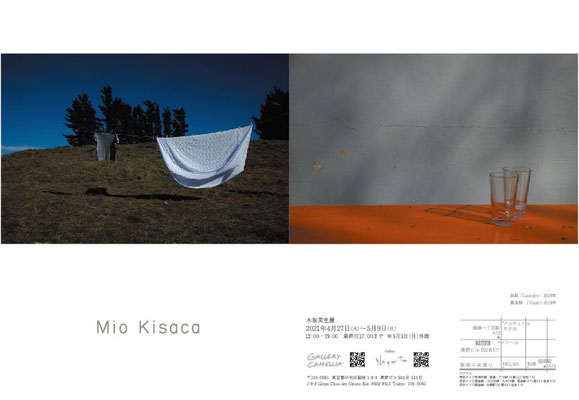 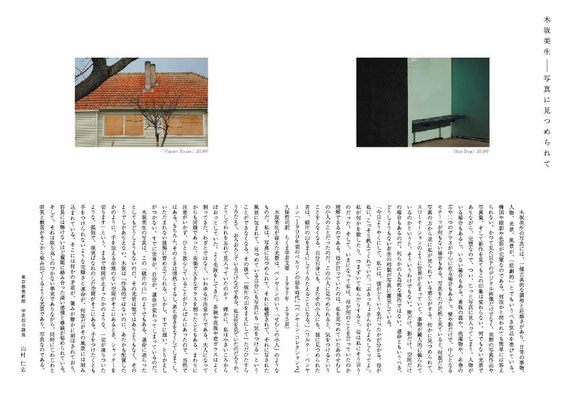 Mio Kisaca: Gazed upon by Photos

Mio Kisaca’s photographic works convey a sense of classical harmony and sublimity; thus, daily objects, human figures, scenery, and landscapes respectively maintain their own sense of dignity, so much so that they could lead to a “tragic” fate. The compositions, nuances, and colors in her photos are flawless. If I were to be asked why I thought so, I would have a difficult time explaining. But I can say that my impression when I first viewed the digital images of Kisaca’s photos on her website did not change when I saw her actual photos and those in publications, nor any time after when I viewed her new works. Although the scenes in her photos are nothing out of the ordinary, my eyes are glued to them in spite of myself because they are absolutely flawless. Kisaca adopts a wide range of compositions. Namely, human figures sometimes appear in her photos, while in others, there are none; and in some, objects are found in the central area, such as the back of a signboard, a few pieces

of laundry, a thread spool, or two glasses. In addition, there are those works without any central motif, but which only show a wall or shadows. Strangely enough, when I gaze at one of her photos in a daze, I begin to feel as if I am the one being gazed upon. That is, I feel I am being gazed at by something, and then the world around me begins to come to a stop in slow motion. One might think that the objects in her photos are taken in a personified way, but this is not so, for some only show a wall, shadows, or a space. Thus, they do not derive from artificial manipulation. Her photos reveal the appearances of inevitable existences that can be described as being manifested by fate. I would like to refer to the following passage written by literary critic Walter Benjamin:

Only today do I know what he was called. My mother gave me the hint. “Greetings from Mr. Clumsy,” she would say, when I had broken something or fallen down. And now I understand what she was talking about. She was speaking of the little hunchback, who had been looking at  me. Whoever is looked at by this little man pays no attention. Either to himself or to the little man. He stands dazed before a heap of fragments.

The scenes Kisaca captures in her photos act similarly to that “little hunchback.” For I felt I was gazed upon by her photo, captivated by it, and then enveloped in the landscape in the photo, which disabled me from “paying attention” to my own self gazing at her work or the photo before my eyes. In the aftermath, all I could do was fluster about and be “dazed before a heap of fragments.” What was it that I was viewing? Why was I entranced by  her photo? I admit that ever since I was small, I have often been absentminded and have made many mistakes. I broke many rice bowls, vases and window glass—not on purpose, but from so-called carelessness. This clumsiness has not changed in my adult life. I once broke a valuable, large glass work. Such blunders were hardly surprising since I have often been absentminded and paid no attention to what was going on around me. Every time I blundered, I was of course appalled at myself and lost my cool, while also tormenting myself with unbearable regret. But it was always too late, for it was irreversible. The world, my own self, and the fate of the world had already been irrevocably changed by then. Mio Kisaca’s photos can be seen as the said “heap of fragments” that the hunchback made. It would be useless for her to go against the fate of those fragments. The scenes in her photos are impossible to find anywhere else, and they can only be the way they are. Kisaca stated, “I click the shutter only when a spatial composition that is impossible to be modified in any other way is there before my eyes, that is, as if the images in the scene had been arranged, even though that was not intentionally done.” In her photos, one finds unrealistic spaces with a sense of solitude, in which time has seemingly stopped ticking, as if everything has frozen. Strangely enough, Kisaca’s landscapes are ingrained with an unchangeable, absolute perfection and a strong sense of fate. Stealthily imprinted in them is an indescribable type of discrepancy and a sense of pain. They also conceal deep emotions and a sense of dignity, which are too intricately entangled to be easily unraveled. Although such a state is an irreversible fact, Kisaca’s scenes/photos at the same time allow the viewers to feel as if they can hear a roar of laughter and sense delight oozing out from within them.